This paper examines the animal remains at Castro de Chibanes, mostly before the Beaker period.  Lots of young pigs, goats and wild rabbit remains along with fish and some birds.   They probably milked some goats.

Most of the butchered animals are domestics, but really very few cattle remains and some of those are rather big, which they are unable to eliminate the auroch. 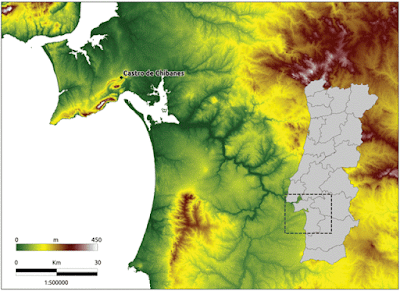 This study integrates archaeological, zooarchaeological and taphonomic results from the Chalcolithic, the earliest chronological period from the excavations at Castro de Chibanes (Palmela, Portugal). Preliminary results from the “Horizonte IA” (Phase IA1 and IA2), regarding the first half of the 3rd millennium BC will be presented.
The faunal assemblage consists of a total of 858 remains. These predominantly comprise of domestic mammals – particularly pigs, sheep and goats – which are interpreted as food supply. With low percentages of wild game, animal husbandry emerges as a central activity for these populations, complimented by marine fishing. In addition, small game hunting – mainly of lagomorphs and a few birds – is also identified.
As at other archaeological sites in the region, the material culture suggests that Castro de Chibanes can be ascribed to the cultural domain of the pre-Bell Beaker Chalcolithic of Estremadura. Particularly comparative sites include Leceia, Zambujal and Penedo do Lexim, also fortified settlements with high rates of domestic livestock (suids and caprines) and extremely low percentages of wild game, in particular red deer.
Posted by bellbeakerblogger at 10:19 PM
Email ThisBlogThis!Share to TwitterShare to FacebookShare to Pinterest