Veiling the Dead - Part III (What the Heck is Apotropaism)

Back in the saddle today! Wheew!!

In the first post, a hypothesis is proposed that red burial pigment, however manifest, was intended to be an apotropaic device for the ancients, not a "cash bath" for the wealthy.  Whether a red shroud, dusting, veil or body rub, the motivation for red burials was wholly grounded in superstition (2nd post).

I'll try now to put red veils, rubs and cloaks into what I think is the correct context of the red burial phenomenon (ROT) and how these burial rites may have been driven by beliefs regarding the evil eye.  The El Argar and Djumbulak kum folk can help me make that case.

As usual, the Greeks were conveniently poised in history to leave us a good proxy to begin pivoting into nearby cultures.  I'll begin with Athena who is a perfect synthesis of apotropaic virtue.


Her crimson, madder-dyed aegis  (Herodotus iv. 189) has fluttering gold tassels; the cloak also decorated with the head of a gorgoneion, and whose face is suggestive of a wild vulva (Dutsch, 2015).  She is strongly associated with the owl oculus image.  More importantly, her piercing blue eyes stare down any evil to threaten Attica or her sailors (significant in a Mediterranean context).  Her peplos is belted by two snakes.

All of Athena's attributes are meant to disguise, hide from or deflect evil.  She uses her persuasive and apotropaic powers to protect and advocate for the average mortal hero.  So let me build a context by deconstructing a few of these attributes.

In the ancient world, it was believed (by the Greeks most clearly) that blue-eyed people cast the evil eye.  (just as various superstitions dog albinos, twins and the disabled) Not surprisingly, a vast collection of trinkets and statues have inlaid blue eyes or blue eyeliner from the earliest Neolithic.  It is a type of deflective power similar to grotesques (fight fire with fire).

Breasts, eyes and owls are conflated in other oculus forms as seen in the mix of Mesopotamian and Iberian oculado plaques below.  The two Syrian alabaster plaques incorporate the oculus, a bauboic representation, with stags or owls around a pubic triangle, which occur in both regions.  I would interpret it as "bauboic anasyrma conflated as an oculus", being in essence, a 'hooter plaque', a doubly potent deflector of misfortune (pun city).

The forth image from Mespotamia is more clearly an owl, and several of these demonstrate that the majority of Syrian oculados are in fact metaphorically schematized owls.  This is true of many of the Iberian plaques as well, some of which very accurately depict an owl, while others conflate several things together.  I've thought that the Freddie Mercury idols also incorporate this strigiforme imagery [here].


Throughout the Mediterranean Basin and the Atlantic realm, owls are considered bad luck, vessels of dead souls or harbingers of impending death, misfortune and vanishing luck.   That makes the 'man inside', the 'stag man' or 'nuclear owl families' within the bosom of some of these have deeper meanings.  As with many grotesques and amulets, they may be protection by reflection.  Here's a paper that builds on Schumacher's 2013 connections and the re-occurring themes Orrelle & Horowitz, 2016.

So it's no accident that Athena, Ishtar or fill-in-the-Near-Eastern-goddess (tamer of beasts), stands on a defeated lion, girded by snakes and flanked by hooters while shining her headlights into hell.  It's possible that these beasts are 'familiar spirits' because of their big eyes, cats possibly being bauboisms as well (eg., a cat's face).

Speaking of hooters, there is a category of idols and images that show women exposing the triangle chi, the vulva or presenting the breasts, either in-hand or chest forward.  The commonly accepted view is that these are fertility goddesses (which is dumb), or somehow lewd gestures of fertility.  But if you examine these figures very closely, a pretty good case can be made that most of them are anasyrmaic representations.


A more recent example is the Sheila na gigs or 'evil eye stones' of the Isles.  Throughout Europe and the Near East (until this century) almost every single pocket of Europe all the way to China, had some bizarre tradition of women exposing themselves to chase away evil.  As Dorota Dutsch (2015) evaluates on ancient anasyrma, the flashing done by women was categorically different from the rude or comical flashing of men.  It had serious implications in the spiritual realm when used by mortal women and goddesses.

I'd go further to suggest that the earliest ocher-covered Venus figures of the Paleolithic are also amulets, not a reminder of one's genitalia.  As you look closely to their distribution and the means to which they were displayed (either by peg feet or on pedestals), its clear most idols were prominently displayed (perhaps over doorways) or held in the hands (in childbirth or death throes, such as sheila na gig stones).

Finally, I'll end with the gorgoneions, horus eyes and grotesque figureheads have been used on ships from at least the Egyptian and Phoenician periods, before transitioning into the use of red coloring in many superstitions in the next post.


A kind of Gorgoneion or eyes appears on many early ships: [junks], [draakars], [triremes] and the solar boat of Ra/Horus and larger Egyptian galleys.  Modern figureheads mounted under the bowspirit developed out of the Viking/Italian tradition, although some boats, such as luzzus, continue with the older tradition.  But is this limited to ships?

A British archaeologist by the name O.G.S. Crawford, wrote a book entitled "The Eye Goddess" where he makes the case that Neolithic monuments of Europe with swirly circles or concentric circles are really a kind of psychedelic eye (my twist) , along with the power eyebrows found on many megalithic tombs.

Like all of the amulets before, that crushing heap of oculus images, I think these 'eyes' were put on tombs to keep bad spirits, robbers and scavengers out.

Next up, superstitions about burials!

As JV points out in the comments of the last post, notice the blue stones over the eyes of this Taklamakan infant.  Notice the red yarn plugging the orifices and the coloration of the burial garment. 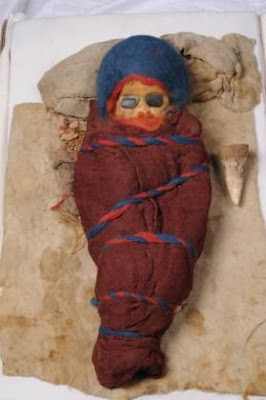 Good grief, what a month.  I've discovered that a blog series is bad luck.  March will be interesting.

Posted by bellbeakerblogger at 5:22 PM