More speculation on an Anthrogenica teaser posted by Jean Manco [also].  The authors of this study are 'excited' with the results which include two yet-to-be-announced discoveries.

Let's say this subject is an on-going conversation to save space.  I'll limit the conversation to a few genetic studies haven't made a lot sense this last year.
1.  Something weird is going on in the Northern and Southern Mestas of Iberia based on this paper by Christina Roth, 2016.  Substantial maternal discontinuity, but like the opposite of what has reasonably been expected since Brotherton, 2013.

Not only is the discontinuity pronounced, it's not really local based on my understanding of Neolithic Iberia.  This story may involve an AOC beaker/body or it may show a Maritime population that is distinct from Northern Europe.  Who knows.


2.  This study by Hervella et al came out in 2015 showing the extremely high levels of maternal haplogroup H in the North Balkans at an early time in the Neolithic.  Keep this in mind while spying Harrison, 1974 and also keep a paper by Szecsenyi-Nagy, 2015 in mind.

I've blasted a number of researchers for early studies showing Mesolithic H in the Iberian Peninsula.  It still believe that those ancient (pre-2005) studies have a lot of contamination and missed calls.  Unfortunately, Brotherton 2013 built on some of these flawed studies which led to a directionality (out of Iberia) of the Beaker migration that seemed to be supported by radiocarbon dates of Muller and VanWilligen.  (Not that porto-beaker in Iberia isn't widely accepted, even here).

Overall, there has been an insufficient explanation for the rapid, stratospheric rise of haplogroup H in Bronze Age Europe, other than selection.  I asked mtdna Atlas that question here.

In a way, maternal frequencies are more difficult to explain outside migration. Migrants have to come from somewhere. 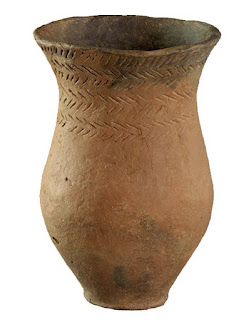 3.  Another possibility is that a Protruding Foot Beaker individual, or several, are Atlantic Modal Haplotype in Holland.  In this frame the PFB's came in trade contact with Iberian traders and the style evolved to the All Over Cord beaker which spread everywhere else.  The Dutch Hypothesis is no longer widely accepted, but in this view there is a reflux into Iberia of AOC beakers very early.

There's several other possibilities that may be, but Volker Heyd's Beaker paper may come out before then.  If not, I'll continue to throw darts at the possible.

Posted by bellbeakerblogger at 12:11 AM
Email ThisBlogThis!Share to TwitterShare to FacebookShare to Pinterest